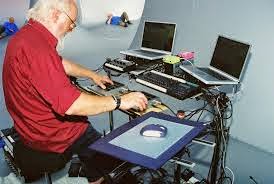 Mouthwind is a project initiated by Belgian vocalist Jean-Michel Van Schouwburg and British live processing expert Lawrence Casserley. The core of Mouthwind is their duo, with Lawrence transforming the remarkable sounds of Jean-Michel’s voice into a dynamic and kaleidoscopic fusion of textures. Often they integrate other performers into their work – in 2007 a trio with Paul Hubweber, in 2009 a quintet with Marjolaine Charbin, Jacques Foschia and Adelheid Sieuw, in 2010  they are focusing on the core duo and performed in The Vortex, London, in Brussels and in the Pohyb – Svuk – Prostor festival in Ostrava and Opava (CZ).
Mouthwind augmented with Marjolaine Charbin performed again in London for the Lawrence's 60th Birthday concert in september 2011. In 2012 the duo was joined by violin maestro Phil Wachsmann and also by bassoonist Mick Beck.

For both these musicians the voice, vocal utterance and communication are at the centre of what they do and believe, as well as the transformative and emergent powers of these utterances. Lawrence’s electronic transformations intensify and enhance these properties. The musicians they gather around them project these same qualities in their music; the Mouthwind is the emergent and transforming flow of communication from the voices of their instruments.  CD MouthWind (Heyermears Discorbie HD 012)
Tracks of the Frogs pieces :
https://soundcloud.com/jean-michelvanschouwburg/sets/frogs-by-mouthwind

Lawrence Casserley (born London 41) was one of Britain’s earliest pioneers of live electronic music, from his student work in the 1960s, through the intermedia groups “Hydra” and Peter Donebauer’s “VAMP” in the 1970s to the Electroacoustic Cabaret in the 1980s. For the last twenty years he has been a Director of the Colourscape Music Festivals, and since taking early retirement from his Professorship at the Royal College of Music, London in 1995, he has focused on the development of live computer processing in free improvised music. The original version of his Signal Processing Instrument was developed during a residency at STEIM, Amsterdam in 1997, where he was assisted in his work by Evan Parker and Barry Guy. Since then he has become a key member of Evan’s Electro-Acoustic Ensemble and has performed with many of Europe’s foremost improvisers. Projects w Phil Wachsmann, Adam Linson, Charlotte Hug, Gianni Mimmo & Martin Mayes. He has CDs released on Konnex, Leo, Maya, Psi, Sargasso and Touch.

Lawrence Casserley (born UK, 1941) has devoted his professional career, as composer, conductor and performer, to real time electroacoustic music. In 1967 he became one of the first students of Electronic Music at the Royal College of Music, London, UK, on the new course taught by Tristram Cary. Later he became Professor-in-Charge of Studios and Adviser for Electroacoustic Music at the RCM, before taking early retirement in 1995.

He is best known for his work in free improvised music, particularly real-time processing of other musicians' sound, and he has devised a special computer processing instrument for this work (picture above). He has worked with many of the finest improvisers, particularly Evan Parker, with whom he works frequently as a duo partner, in various larger groupings and in the Evan Parker Electro-Acoustic Ensemble. He also works as a soloist, processing sounds from voice, percussion and home-made instruments. CDs have been released by ECM, Konnex, Leo Records, Psi, Sargasso and Touch.

Casserley's "instrumental" approach to live computer sound processing is the hallmark of his work; the Signal Processing Instrument allows him to use physical gestures to control the processing and to direct the morphology of the sounds. This is the culmination of forty years of experience in the performance of live electronic work; his earliest live electronic pieces were performed in 1969, and he has performed many of the live electronic "classics" of the 20th century; he has also collaborated with other composers to realize their electronic performance ideas. He is noted for the breadth and variety of his collaborations, which cross styles and generations.
Here an interesting page of the visual score of Sette Pagine devised and written by Lawrence Casserley : http://www.lcasserley.co.uk/Sette_Pagine.html

Bonne lecture Good read ! don't hesitate to post commentaries and suggestions or interesting news to this...... 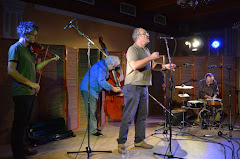